Beyond the Ballot with Paul Lux

“The sun never sets on voting in Okaloosa County,” shared Paul Lux as he showcased the pins representing his overseas voters that dot the world map in his office. In 1999, Lux was working as an information technology (IT) specialist for a local real estate office in Okaloosa County when he was approached by the company’s secretary regarding an open position with the Supervisor of Elections. Influenced by his educational background in government and his voting experience during his military service, Lux soon applied for the position. Shortly thereafter, he was brought on staff as an Information Systems Coordinator, a role in which he served for five years before rising through the ranks to become Supervisor of Elections in 2009.

While in office, Lux has witnessed numerous advancements in the technologies used to administer elections. During the early 2000’s, lever machines and punch card voting were still commonly used to cast and count voters’ ballots. Following the Bush v. Gore Presidential Election, punch card voting was largely abandoned due to counting issues stemming from incompletely punched chads. Direct-recording electronic (DRE) voting machines were then adopted due to their utility for voters with disabilities, provision of immediate feedback to voters, and prevention of overvotes. Some machines, however, do not produce voter-verified paper audit trails (VVPAT), and thus many jurisdictions have since transitioned back to the use of paper ballots and optical scanners.

Despite rapid advancements within the technology sector at-large, innovation within the realm of voting equipment has been slow moving. According to Lux, this can be attributed in part to the uncertainty surrounding how frequently new iterations of the Voluntary Voting System Guidelines (VVSG) – the standards and requirements to which all voting systems in the U.S. must adhere – would be adopted. “This (uncertainty) disincentivized technology vendors from investing in research and development given the lack of clarity surrounding the length of time for which new systems would be considered compliant with the VVSG,” Lux explained.

By 2015, Lux had become a well-known figure in the wider elections community with a demonstrated interest in tackling barriers to the development of voting technologies. As such, Lux was selected to become a member of the U.S. Election Assistance Commission (EAC) Standards Board. While on the board, Supervisor Lux represented the perspective of local election officials while working closely with members of the Technical Guidelines Development Committee (TGDC) to review 15 high level assertions for the VVSG*. Impressed with Lux’s work on the Standards Board, EAC Commissioner Don Palmer appointed Lux to the TGDC in 2019, a role in which he remains today.

Although advancements in voting technology have been slow moving, this has not deterred Supervisor Lux from securing his County’s participation in technology-centered pilot projects for uniformed and overseas citizen voters (UOCAVA). In Okaloosa County, approximately one-fifth of registered voters are uniformed services voters posted at military installations within the County, such as Eglin Air Force Base, Hurlburt Field, and Duke Field, among others.

The prevalence of this protected group in his jurisdiction, in combination with his previous military service, prompted Lux to put voting access for these citizens at the forefront of his tenure in office. While serving as the county’s IT specialist, Lux helped oversee the Voting Over the Internet (VOI) project. Through this pilot program, UOCAVA voters were permitted to return their ballots to the Supervisor of Elections via the Internet. Although the pilot was successful, events surrounding the 2000 election largely overshadowed its impact within the wider elections community.

In 2004, Lux and his colleagues at the Supervisor of Elections office secured Okaloosa’s participation in the Secure Electronic Registration and Voting Experiment (SERVE). This program once again allowed UCOAVA voters to cast their ballot via the Internet while also allowing them to register to vote online. After security concerns prompted the cancellation of the program, Okaloosa County partnered with Scytl, a Spanish provider of electronic voting systems and election technology, to initiate the 2008 Distance Ballot Pilot project. This project allowed UOCAVA voters to utilize a kiosk to cast their ballots while abroad rather than mark and return a ballot via mail or the Internet. Four years later, Okaloosa County secured its participation in both Electronic Absentee System for Elections (EASE) grant programs administered by the Federal Voting Assistance Project.

Despite the relative success of these pilots, concerns regarding the security of electronic ballot return methods have stifled Supervisor Lux’s ability to provide his UOCAVA voters with a long-term solution for electronic ballot return. Although voters in Florida are authorized to utilize fax technology to return their ballots, Lux does not see this as a viable alternative to mailed ballots. “I’m still struggling with looking for means of electronic ballot return that are beneficial for soldiers in the field. What guys in forward deployed areas in Afghanistan don’t have access to is a fax machine” explained Lux.

Despite the barriers Lux has faced as Supervisor, he remains committed to pursuing a viable and secure means of electronic ballot return for his uniformed and overseas citizen voters. In addition to his membership on the TGDC, Lux plays an active role in The Council of State Governments Overseas Voting Initiative (OVI) where he collaborates with fellow election officials and OVI team members to assess feasible and secure methods of electronic ballot return for UOCAVA voters. According to Lux, this pursuit is what continues to drive him as an election official. “That’s the legacy I want to leave behind – that through my office, I was able to make sure that military voters got to vote,” said Lux.

*VVSG high level assertions break down agreed upon voting system requirements into clear guidelines for how voting systems should be designed and developed and how they should operate.

The post Beyond the Ballot with Paul Lux appeared first on CSG OVI. 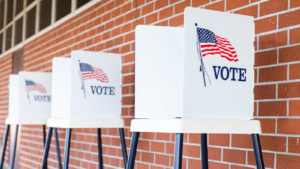