Passed on Nov. 15, 2021, the Infrastructure Investment and Jobs Act contains $1.2 trillion in spending, $550 billion of which is new federal spending while the remaining $650 billion comes from reallocation from other federal programs or from past funding sources. State leaders have access to this new funding focused on transportation, broadband, cybersecurity, energy, environment and disaster response. As policymakers prepare for an influx of cash, CSG offers ongoing fiscal analysis and resources for understanding federal spending.

States own and maintain the vast majority of the roads and bridges throughout the country, including the interstate highway system. In fact, states maintain around one million miles of streets and highways that account for 85% of vehicle travel miles. The U.S. Department of Transportation has determined that 21.8% of roads are in poor condition and 7.6% of bridges need to be repaired or replaced. States often rely on federal funding to assist in funding costly road and bridge projects. The infrastructure act funds (or creates various programs to administer funds for) critical infrastructure. 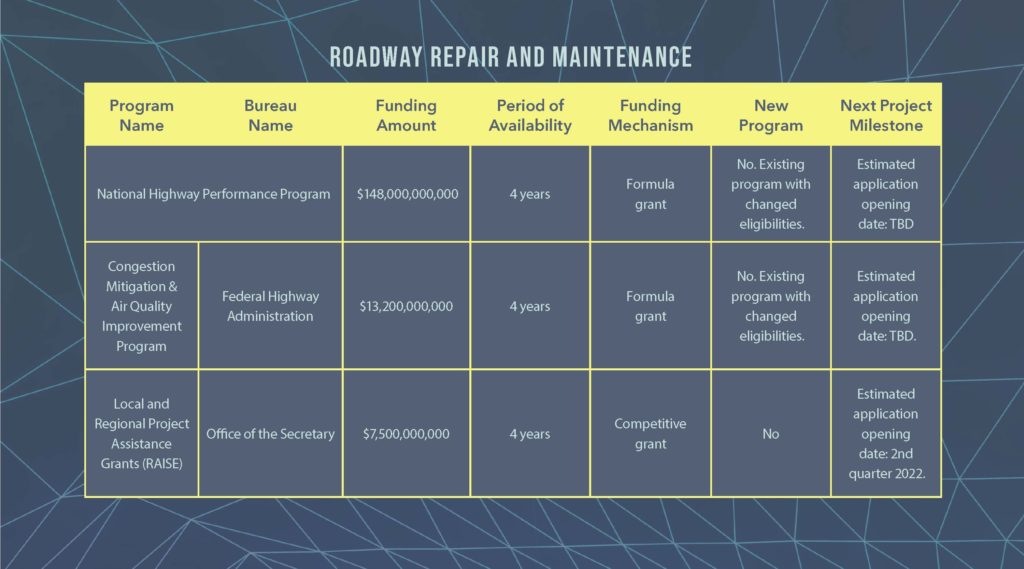 The infrastructure act allocates approximately $40 billion to the Federal Highway Administration for bridge projects. A new $12.2 billion competitive grant program, the Bridge Investment Program, allows states to apply for a grant to replace or repair bridges on the National Bridge Inventory. For example, Kentucky and Ohio are jointly applying for funding through the Bridge Investment Program to replace the Brent Spence Bridge, which spans the Ohio River. The Federal Highway Administration is also administering roughly $27 billion over four years to state transportation departments through the Bridge Formula Program. This new program provides formula funding to states for bridge replacement, rehabilitation, preservation, protection or construction projects on public roads. 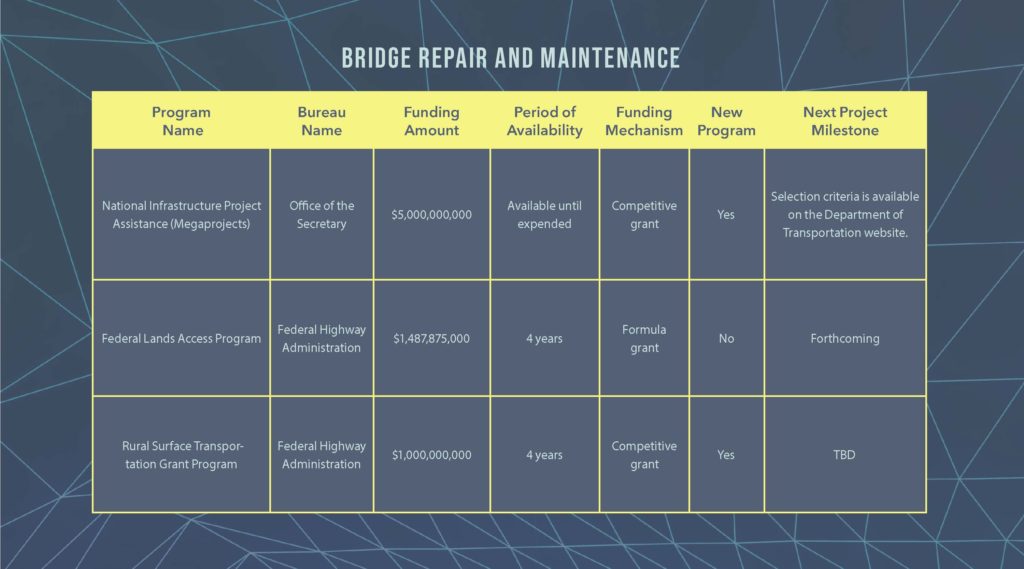 The infrastructure act is also investing $66 billion in advanced appropriations over four years to improve the nation’s passenger and freight rail networks. These programs will modernize the Northeast Corridor (stretching from Washington, D.C., to Boston), expand passenger rail outside of the corridor, improve rail safety and upgrade freight rail infrastructure.

State and local governments face an estimated $105 billion repair backlog on public transportation systems. To reduce the backlog through funding capital projects, the Federal Railroad Administration is administering $36 billion in competitive grants through the heavily revised Federal-State Partnership for Intercity Passenger Rail Grants. Revised to expand the list of eligible projects outside the Northeast Corridor, this program funds capital projects to reduce the backlog and improve intercity passenger rail. An additional $7.5 billion is authorized contingent on future appropriations. In 2020, Connecticut used approximately $29 million of the Federal-State Partnership for Intercity Passenger Rail Grants to rehabilitate and upgrade platform and track areas of the Worcester Union Station. 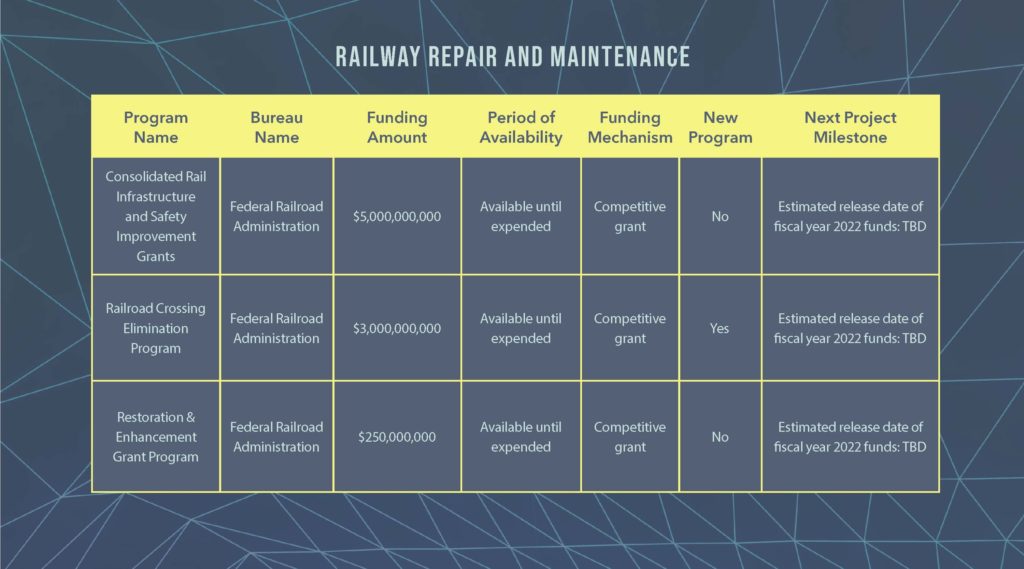 To further ensure systems repair will occur, the Federal Transit Administration is administering $91 billion in new and existing programs. States can use these funds to support efforts in repairing and modernizing public transportation while also expanding public transportation options. The infrastructure act reauthorizes the State of Good Repair Grants for over four years. The FTA will disburse roughly $21 billion in formula grants to state and local transportation departments for designated projects. The FTA will match up to 80% of the cost of capital projects that bring fixed guideway systems and equipment into a state of good repair. The infrastructure act also adds a competitive grant component, contingent on future appropriations, for states to fund projects to replace rail rolling stock (locomotives, freight cars and flat cars) 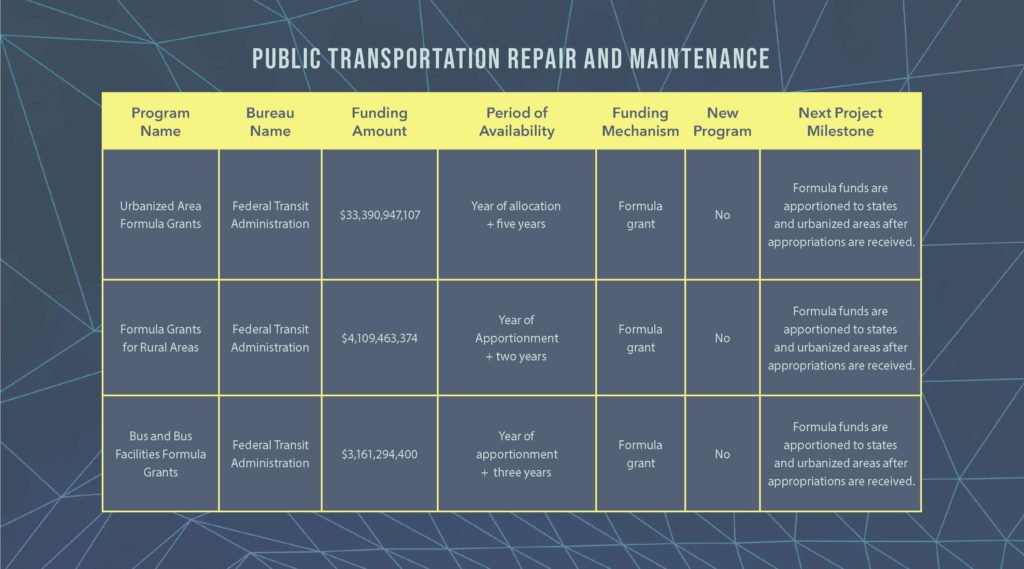 The United States has one of the highest traffic fatality rates in the industrialized world. An estimated 38,680 people died in motor vehicle crashes in 2020, of which 6,236 were pedestrians. Motor vehicle crashes were up 18% in the first half of 2021 over 2020. To help states improve the safety of their transportation systems, the infrastructure act is investing nearly $38 billion toward safety projects. States will continue to receive formula grants through the Highway Safety Improvement Program. The Federal Highway Administration is dispensing approximately $15 billion over four years to states for safety projects on public roads. State transportation departments must use a data-driven process when selecting highway safety improvement projects. Projects should be selected based on crash experience, crash potential, crash rate or other data-supported means. The second round of funding will be released in October 2022. The state of Washington received $26 million in Highway Safety Improvement Program funds, and in 2019, 70% of such funds were used to fund local safety projects. One such project was to design safer slopes on lane departures in Adams County.

The Federal Railroad Administration is authorized to expend $3 billion in funds through the Railroad Crossing Elimination Grant program. These competitive grants will allow states to improve highway-rail or pathway-rail crossings. Eligible projects under the program include grade separation or closure, track relocation and installation of protective signals and signs. Funding for Fiscal Year 2023 will be released in October 2022. 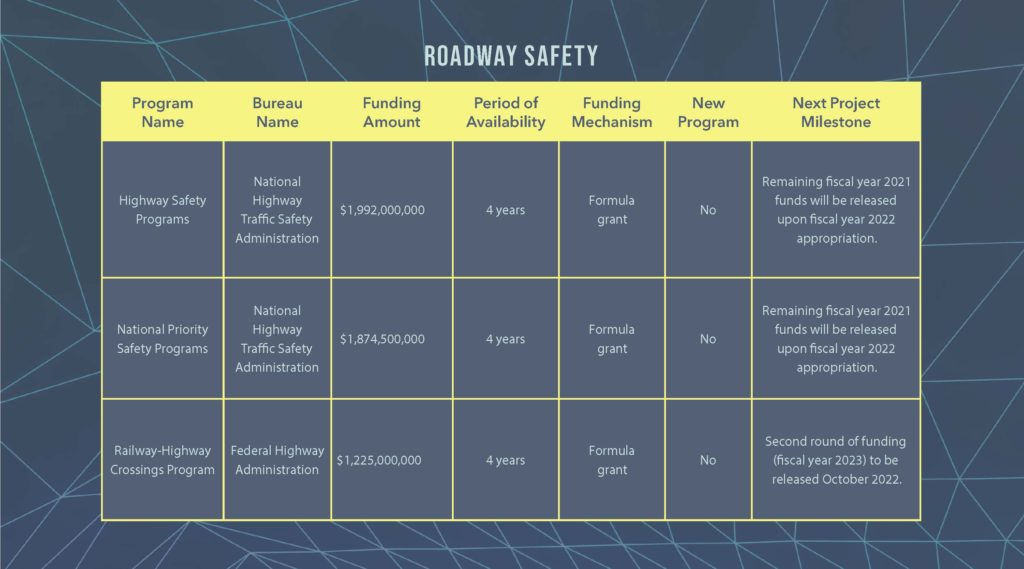 The infrastructure act also invests in America’s airports, ports and waterways, allocating $25 billion for repair and maintenance needs, reduction of congestion and emissions and the modernization of the National Aerospace System. An additional $16.7 billion is dedicated to projects that improve infrastructure at coastal ports, inland ports and waterways and land ports of entry along the border.

Airport Infrastructure Grant funds totaling $15 billion over five years are available to states that own an airport belonging to the National Plan of Integrated Airport Systems. The Federal Aviation Administration will issue a notice of funding for competitive $20 million annual grants for traffic control tower construction and maintenance in May 2022. 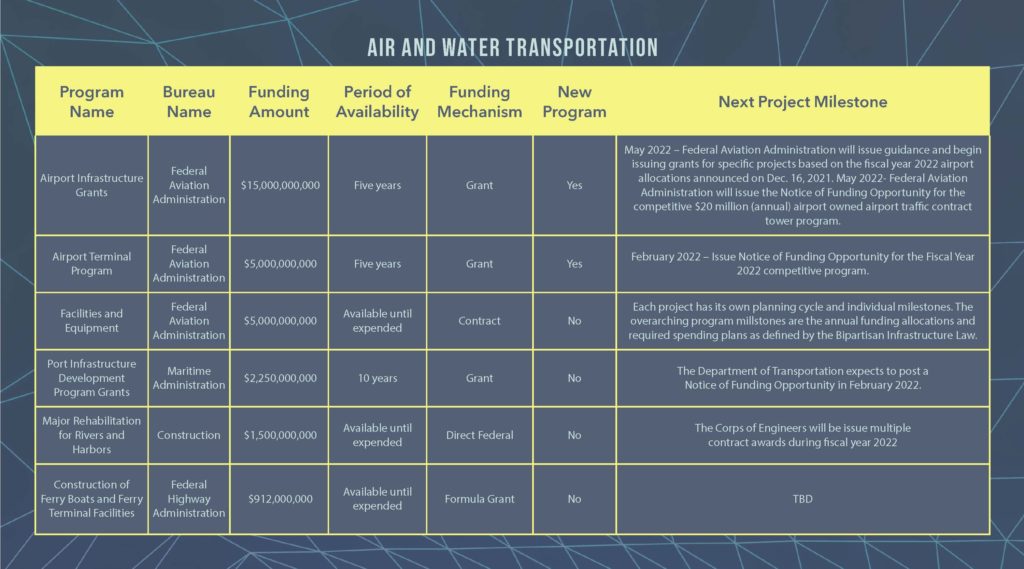 The pandemic has accelerated the need for broadband access for essential functions including school, work and access to health care. However, approximately 30 million people live in areas with either no broadband infrastructure or unacceptable minimum internet speeds. Internet access is especially lacking in rural areas. The Infrastructure Investment and Jobs Act is investing $65 billion in new and existing programs that expand broadband infrastructure and assist in lowering internet prices. The National Telecommunications and Information Administration is administering $42 billion through the Broadband Equity, Access, and Deployment Program. Created by the infrastructure act, states and Puerto Rico will each receive a minimum of $100 million in funds while the remaining territories will each receive a minimum of $25 million for broadband planning, deployment and adoption projects. The remaining funds will be distributed based on a formula that considers the number of unserved and high-cost locations in the state based on maps to be published by the Federal Communications Commission. 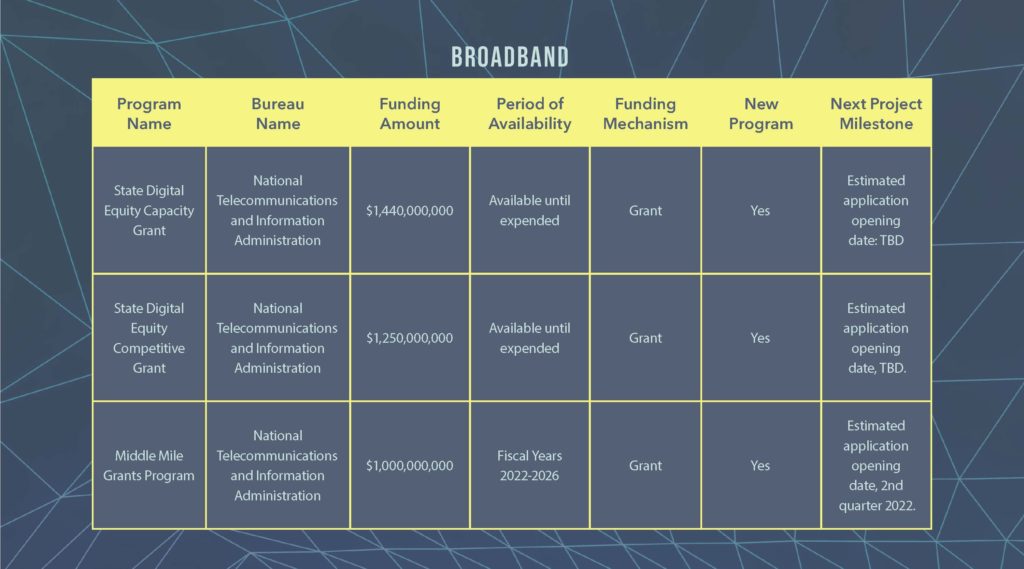 The Infrastructure Investment and Jobs Act makes significant investments in projects to improve the nation’s energy infrastructure and environmental resilience. Many of these projects will require significant cooperation by and among states. The infrastructure act provides approximately $75 billion toward energy projects, $21.3 billion of which will go to energy infrastructure that delivers clean energy and $21.5 billion for clean energy demonstration projects like clean hydrogen and advanced nuclear reactors. States are required to engage public-private partnerships. An initiative called Program Upgrading Our Electrical Grid and Enduring Reliability and Resiliency makes available $5 billion in funding through cooperative agreements or grants. These grants are to facilitate regional grid resilience through partnerships among utility owners and operators and states with utility cooperatives. A combination of two or more states, local governments and/or public utility companies are the intended recipients of the funds, which will be available in the fourth quarter of 2022. 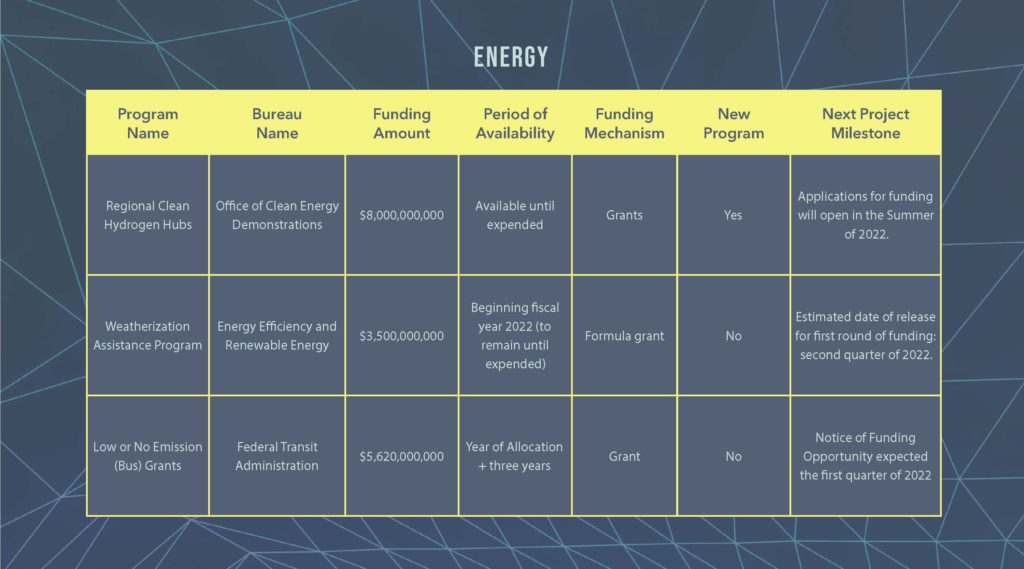 Around 10 million households do not have access to clean drinking water. The infrastructure act provides $23 billion for states to establish Drinking Water and Clean Water State Revolving Fund programs. These funds will allow states to offer loans and grants to eligible entities for water projects. These water projects must focus on disadvantaged communities. The infrastructure act requires that 49% of Clean Water State Revolving Funds be eligible as grants or 100% of the funds be principal forgiveness loans. The Indianapolis Airport Authority received $30 million from Indiana’s State Revolving Fund Loan program in 2019 to install new stormwater and deicing runoff infrastructure. 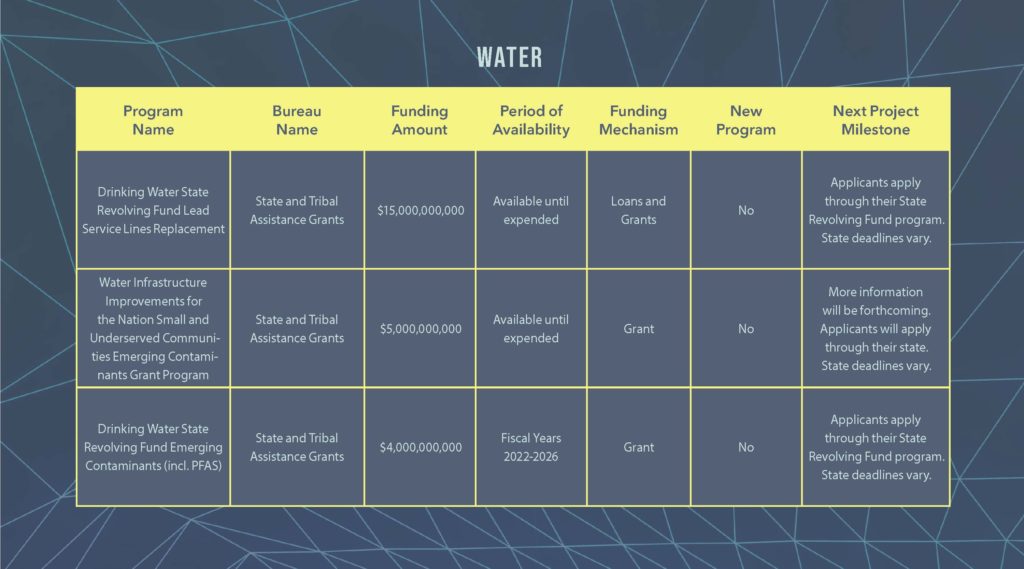 To assist communities in responding to natural disasters and cyberattacks, the infrastructure act contains approximately $50 billion for programs that increase resilience. This includes $8.7 billion in grants from the Promoting Resilient Operations for Transformative, Efficient, and Cost Saving Transportation Grants program, which contains roughly $7.2 billion over four years in formula grants for states to conduct resilience planning and increase the resilience of surface transportation infrastructure from the impact of natural disasters. Another $1.4 billion in competitive grants is available over four years for states. 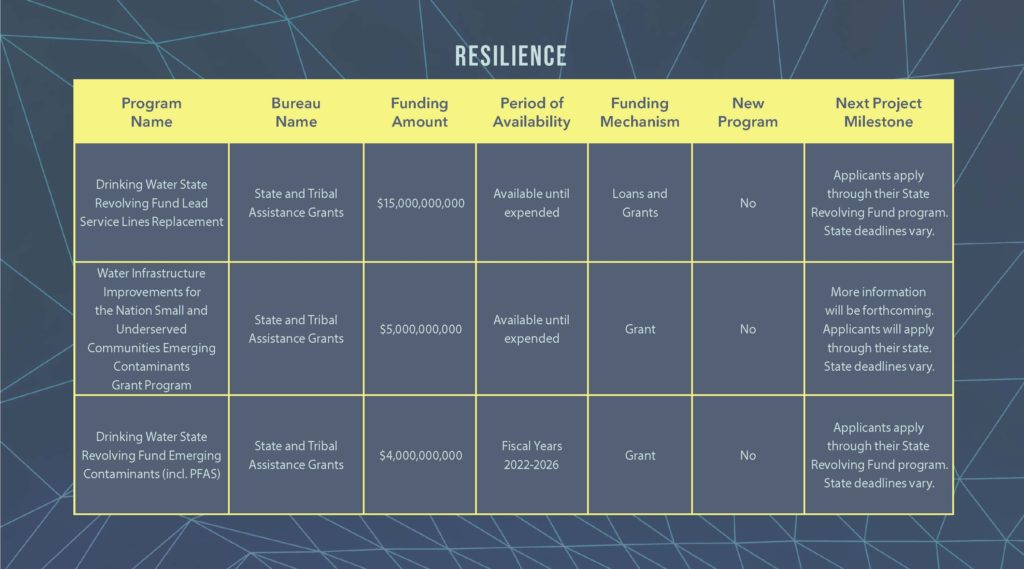 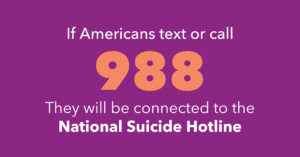