The Congressional Budget Office released its annual Long-Term Budget Outlook in July. The Long-Term Budget Outlook is a 30-year projection of different economic factors like government spending and revenues. The outlook is used as a tool for policymakers to evaluate the impact of proposed legislation against baseline economic data, such as the gross domestic product (GDP), which measures the total output of the United States economy and provides insight into to economic growth. This year’s report represents a continuation of recent forecasts, predicting a rise in mandatory federal spending on entitlement programs such as Medicare and Medicaid, increased interest costs on the deficit and a historically high debt to GDP ratio. Regardless of how the federal government approaches the unprecedented conditions predicted, states will have to grapple with changes in funding and fiscal practices to ensure their budgets remain balanced.

Here are three takeaways for state leaders from this year’s report:

There are four main projections calculated in the outlook: the deficit, debt, spending and revenues. While states are trying to predict the forecast and how to prepare, all four factors point to stormy weather and rainy days with potential long-term economic difficulties:

Under current fiscal practices, the budget deficit is expected to climb from 2.3% of the GDP to 3.9% at the end of 2052. As the deficit continues to grow, the national debt will climb from its projected 2022 total of 98% of the GDP to 185% in 2052, nearly doubling in size and reaching a historic high in 2031.  Even as the end of federal pandemic relief programs results in a dip in federal spending, the budget will ultimately rise from 23.5% to 30.2% of the GDP by 2052. Increases in spending are driven by mandatory expenditures for programs like Medicare and Social Security, which will gain more dependents and experience higher costs as the U.S. population ages. Additionally, interest on the deficit will contribute to historically high spending. Finally, revenues are projected to spike in 2025 as a result of the expiration of the Tax Cuts and Jobs Act of 2017. The CBO’s analysis makes clear the opportunities and feasibility of reducing the deficit through expenditure and tax-based policies and lays out the growing consequences of inaction. But until changes are made, federal spending will continue to outpace revenues.

While these projections are focused on national trends and policies, states will not be immune to the effects of economic changes; state policymakers can expect economic uncertainty to impact both federal grants to states and the circumstances around state revenue collection.

Tax changes in 2025 are expected to temporarily increase federal revenues and will continue to impact state budgets and tax codes.

Scheduled changes to the tax code will have an impact on the national economy and state policies, but this impact will vary across states and income groups. The 2017 Tax Cuts and Jobs Act had disparate effects on state budgets and tax codes, with many states electing to align their tax laws with most or all of the federal tax legislation. Key provisions of the Tax Cuts and Jobs Act that lower taxes for individuals and families are set to automatically expire in 2025, including the expanded Child Tax Credit and the State and Local Tax Deduction. The State and Local Tax Deduction impacts high-income taxpayers in states such as California, New Jersey and New York most aggressively because the $10,000 cap on deductions generally prevents those who pay the most in state and local taxes from deducting their entire liability from their federal taxes. Lawmakers in such states have sought solutions to ease this burden and prevent the loss of high-income residents.

The future of these provisions is unclear, but the Congressional Budget Office’s analysis of the tax plan shows a nearly $1.5 trillion increase in the deficit over the next 10 years. As such, federal policymakers may look to more wide-sweeping changes to tax codes that would further impact state policies.

Congress may look to cut discretionary spending for state grants and other projects to decrease outlays.

The Congressional Budget Office predicts that continued levels of discretionary spending between an average of 6.2% and 7% of the GDP will contribute substantially to federal debt levels. This debt, held by the public, leaves the economy at an increased risk of experiencing a fiscal crisis that would disrupt global financial stability. With adjustments in the largest mandatory spending programs such as Medicare and Social Security requiring a 60-person majority to pass the Senate and 74 percent of Americans saying benefits should not be reduced, it is more likely that funding for discretionary spending programs and grants to states would be reduced to contain expenditure levels.

Since the federal government provides an average of one-third of state revenues, states are especially vulnerable to disruptions due to changes in federal discretionary spending for programs like Special Supplemental Nutrition Program for Women, Infants, and Children (WIC), Head Start, the Low Income Home Energy Assistance Program (LIHEAP), law enforcement training and development assistance, and the Community Block Development Grant. States rely on these programs to provide for their most vulnerable citizens and policymakers will need to remain informed of their options for sustaining them when faced with reductions in federal funding.

With President Biden signing into law the Inflation Reduction Act, which will reduce the deficit by over $300 million, fiscal consolidation through reduced spending and increased taxes is clearly a top priority for lawmakers in Washington. States should expect to see further action taken, and by remaining educated on the impacts of the federal budget and the CBO’s Long-Term Budget Outlook on their states’ circumstances, leaders can prepare to effectively tackle the economic issues that impact the everyday lives of their constituents. 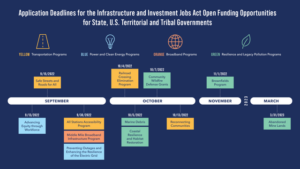 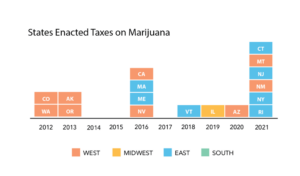